This week I decided not to make a game but more of a control scheme for one. I revisited the game Flow (super addictive and overall fantastic game by the way, play it here) which uses only the mouse and decided to try my hand at emulating the mouse controls.

I ended up deciding to go for two different schemes:

Click the image below to play around with the demo..er…thingy. 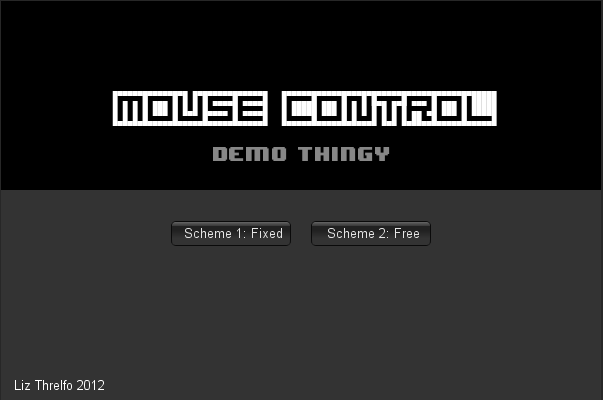 Programming wise I was actually hoping to go even further and figure out how to get the mouse to push an object away but alas my maths skills are still covered in high school cobwebs so I’ll re-visit that challenge at a later date.

The whole week has great. I’ve learned more new programming techniques (raycasting FTW) which I’ll admit occasionally go way over my head but I’m getting there. Also had an unusual amount of fun working on GUI, not sure if procrastination of legitimate enjoyment though.

Not sure what I’ll tackle next week; I’m just going to play it by ear at this point.