This year my aim is to release something. I’m not entirely sure what that something is at the moment but the goal is to sell something for real world money somewhere. Nice and vague I know. Thanks to the revamp of One Game a Month (i.e. iterative work counts) this goal can also coincide with my 2014 12 game goals.

With that in mind January’s game for 2014 is an android version of Wanderlust, my December 2013 entry. 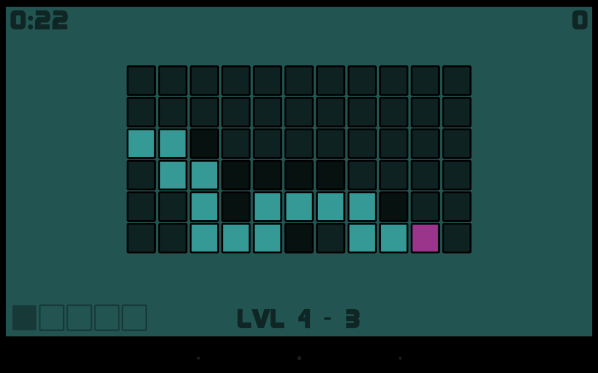 Running on my Nexus 7 second gen.

Things are going pretty well. Things ported over really easily thanks to some Unity functions that work for both a mouse and touch controls. Most of my work thus far has been making things look good so basically making everything scale and place correctly no matter what the resolution. The many android devices out there make me very nervous as I’ve always been reluctant to release games untested on every device/platform I’ve targeted (hence why Linux builds are few and far between). Outside of UI work I’ve made input better suited to a touch screen, added a levelling system and added a few bells and whistles.

There are however issues. The pathways spawn far too similarly sometimes (even repeating) and they can be too easy (long lines on the same row). I’ve been having trouble figuring this out with my current code so that means I will likely need to spend more time on the game. I’m not too fussed by this at the moment as I would like to release the game on the google play store with more features I don’t have time for this month anyway.